What are EDI document standards?

What is an EDI document standard?

What is the difference between document types and transport protocols?

Which document types and protocols are most commonly used?

In this article you will learn more about different EDI formats and the difference to common transport protocols. We also present a selection of the most commonly used EDI standards.

Developments in the field of electronic data exchange are becoming more and more important. They offer companies an opportunity to create a direct interface to their business partners and thereby achieve significant productivity increases. However, those who have not yet dealt intensively with the various technologies and processes are usually overwhelmed by the amount of technical terms. In our guide, we want to give you a basic understanding of the world of digital business solutions, from basic terms to complex exchange processes. With the help of our guide we encourage you to recognize the advantages of digital business processes and therefore enable you to take advantage of them. Our international team of specialists supports you with our smart business solutions at every step of your journey to become a digital champion!

An EDI document type is generally definded as an individual specification of a certain file format, structure and content of an EDI document (e.g. invoice, order, order confirmation). A wide range of document types is available to meet the needs of a variety of stakeholders in terms of document properties. The use of standardized document standards ensures that both the sender and recipient system can interpret the exchanged information correctly.

As soon as companies have decided to handle communication and data exchange processes via EDI interfaces, the question arises how the transmission of different types of documents should take place. Each EDI message is encrypted and transmitted by using different EDI protocols. A protocol type can be looked at as a kind of language through which IT systems communicate. An EDI transfer can be operated using any electronic transmission technology. However, the majority of transmissions nowadays take place via the Internet. The number of available protocols has also grown steadily due to the development of new technologies.

A variety of document types meet the needs of different stakeholders in terms of document properties. Uniform document standards ensure that both the sender and recipient systems can interpret the exchanged information correctly. Document standards are therefore defined through strict guidelines for the layout of an EDI format and based on the following modules: 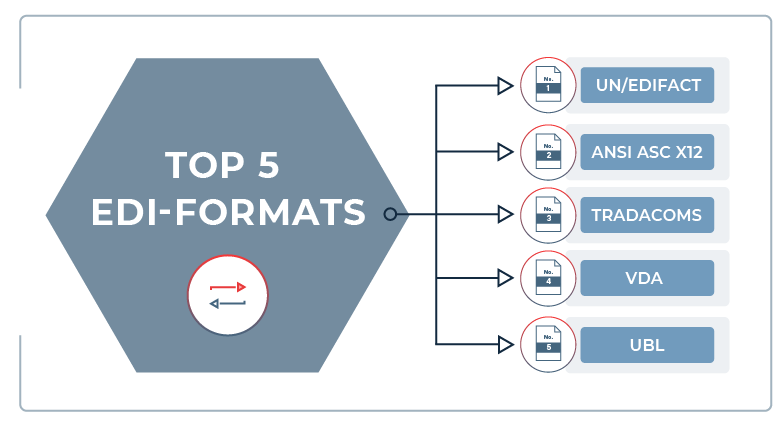 UN/EDIFACT is one of the most widely used document standards for international and cross-sector data exchange. The term EDIFACT stands for Electronic Data Interchange for Administration, Commerce and Transport and therefore represents the electronic data exchange for administration, commerce and transport, according to the requirements of the United Nations.

After the publication of the first cross-industry document standard (X12) by the American National Standards Institute, the global EDIFACT standard was introduced by the UN in 1988. The ongoing maintenance and development of the standard is carried out by the United Nations Centre for Trade Facilitation and Electronic Business (UN/CEFACT).

The detailed structure of an EDIFACT message is recorded in the official updated standard documents. Two EDIFACT standard versions are developed for each half of the year by the UN/CEFACT. The first release of a year is identified by the year number followed by the letter A. The second release of a year shares the same year number and the letter B.

The EDIFACT standard defines different rules for the structure of various standard messages. These rules are based on the building blocks of general EDI formats. The syntax determines the rules for the structure of a message. Data elements form the smallest unit of an EDIFACT file. Several similar data elements form segments. Messages consist of an ordered sequence of segments.

EDIFACT offers companies the opportunity to exchange documents electronically on a multinational and cross-sector basis. Many industries have established variations of the established main standard (so called subdialects or subsets) in order to automate industry-specific information.

EDIFACT documents are identified by a six letter code.

ANSI ASC X12 refers to the American National Standards Institute (ANSI) Accredited Standards Committee (ASC) X12 and is usually abbreviated using X12. X12 was developed in 1979 to promote the standardization of EDI documents in North America. The X12 standard is particularly used in North American markets, while in Europe EDIFACT or its subsets are predominantly used. X12 is used globally by approximately 500,000 companies. Industry-specific modifications of the main standard have also been established for X12. Example of industry-specific subsets:

X12 has a comprehensive selection of over 300 different message types which in contrast to the six-digit EDIFACT and TRADACOMS identifier, are represented by a three-digit code number (e.g. 810 for invoices).

Below are some mandatory standard segments of an X12 document:

ST – Start of the transaction record

IEA – End of the exchange

As with all EDI documents, these segments are in turn composed of elements.

The document standard TRADACOMS was published in 1982 several years before the UN standard EDIFACT and was originally intended for use within British domestic trade.

Despite the low usage rate compared to EDIFACT, 26 different message types are included in the TRADACOMS standard. Within the TRADACOMS standard each message type is assigned a reference of six letters. However, the format of the message is not uniform. Thus a transmission to a business partner can consist of a concatenation of messages. A single order would usually contain an order header (ORDHDR), several orders (ORDERS) and an order attachment (ORDTLR). Individual order messages can repeat themselves between the ORDHDR and ORDTLR besides.

In 1901, the German Association of the Automotive Industry (VDA) was founded by German automotive companies and was one of the first associations to develop its own EDI formats in 1977. All VDA standards were published in German, as their development did not assume a global use of the document standard. Consequently, knowledge of the German language is required to identify the individual document elements, since there is no element-related naming convention for VDA as well as technical terms in German that cannot be interpreted easily.

Each VDA message standard has a unique identification number with four digits. For example the file format 4905 is a delivery forecast. Compared to EDIFACT and X12, the VDA standard uses fixed data elements with constant length, so-called fixed-length format elements, instead of segments or separators. If a data record does not have the required length, spaces are used to close the gaps.

The fixed-length format makes it difficult to convert data to other EDI file formats due to the limited amount of transferable data. As a result, VDA document standards are gradually being replaced by EDIFACT formats. The VDA standards are practically a subgroup of the EDIFACT standards, which are mainly used in the automotive industry. The VDA has published its own proposals for the transition to EDIFACT in order to support users of their document type in their transition to EDIFACT.

The Universal Business Language (UBL) was founded in 2003 and can be used as a collection of standardized XML-based business document formats. The Organization for the Promotion of Standards for Structured Information (OASIS) is the owner of the UBL which makes its document type available to all companies free of charge. By using an XML structure, UBL differs from more traditional EDI document formats. Especially the XML-based transmissions are easier to read than other EDI file formats. On the other hand, XML file formats are considerably larger than other EDI file formats. Within the EU, UBL is considered the recommended document standard for exchanging information via the e-procurement network PEPPOL. The EU Directive 2014/55/EU has further increased the relevance of UBL, as public EU institutions are obliged to exchange invoices electronically in accordance with the aforementioned regulation.

When UBL was founded, it had seven EDI file format standards. By the time version 2.2 was released in 2018, the number had grown to over 80 document types.

Similar to X12, the UBL message type is also divided into categories of higher levels. These are as follows:

The UBL messages themselves include validators, generators, parsers (syntax analyzers) and authoring software.

Do you already know our EDI Whitepaper?

Are you interested in our EDI solutions and have questions?

Get in touch with our EDI experts. We will gladly be of assistance. By phone, email or in person at your premises! 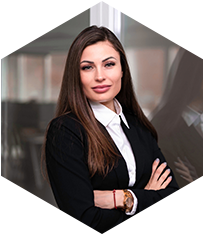