All current information at a glance

As early as December 22, 2021, the French Directorate General of Public Finance (DGFP) published a new VAT package that contains the VAT rules that serve to implement the EU e-commerce directives.
This package also sets out everything around the EUR 10,000 threshold. From this value, traders are allowed to pay VAT on sales in the country of dispatch.

What regulations does the VAT package include?

What’s ahead for companies in France

This means that all invoices between companies subject to VAT must be issued in electronic form. The data contained in these invoices will then be transmitted for VAT collection and control.

The French government has defined a B2B e-reporting obligation that will come into force from 2024-2026. This means that in the future, invoice and accounting data must be transmitted to the tax authorities. The acceptance of electronic invoices will be mandatory for all companies from 2024 onwards. The sending of invoices, on the other hand, depends on the size of the respective company and is therefore

Originally, the deadlines were set one year earlier in each case, but the process was pushed back to give affected companies an extended changeover period.

In addition to electronic invoicing for domestic transactions between companies, the French government has also decided to require companies to also transmit invoice and payment data electronically to the tax authorities for subsequent transactions (e-reporting):

The tax authorities plan to provide sustainable support to companies during the introduction, similar to withholding tax.

The platform to be used for this, which is supposed to be equivalent to Chorus Pro, should be able to process up to 3 billion invoices per year. Invoices can be transferred directly or as an excerpt in XML, CSV, JSON, or YAML format.

In our graphic, you can see the scheme that will be implemented starting in 2024. Companies A and B represent large and medium-sized companies that exchange their invoices with each other. Next, the EDI provider, such as INPOSIA, transfers the invoice data to the tax authority. Companies C and D represent micro-enterprises with low invoice volumes that transmit the original invoices via the tax authority so that the tax authority forwards them to the respective invoice recipient. 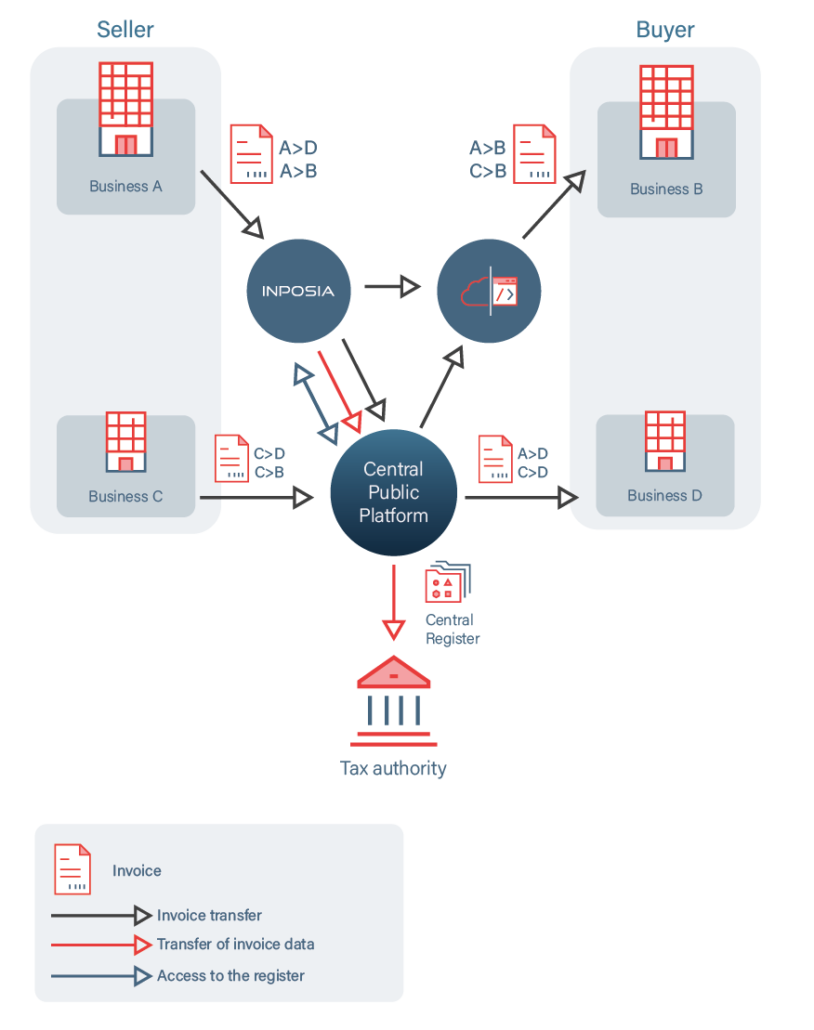 In France, the French SAF-T FEC is only requested when necessary. Usually, this happens before a VAT audit takes place. It is mandatory that these documents be submitted in .txt format.

How the transaction process takes place:

Companies must submit their accounting documents not later than 15 days after receiving the audit notification.

In the following circumstances, the entire accounting, including all related returns and taxes, may be rejected:

Do you want to learn more about our E-Invoicing eBook?

These provisions shall apply from 1 January 2024 at the earliest and from 1 January 2026 at the latest, depending on the size and the sector of activity of the company concerned. You will be able to find out exactly who will be affected in the near future.

E-Invoicing in Greece
Scroll to top